In immersive VR, you wear a device like the one in the picture below to see 360-degree images, giving you a strong sense of realism. The images are not only computer generated, but also live-action photos and videos. These devices are called head-mount displays (HMD), goggles, or just headsets. Currently, gamers are the main users of these devices, but they are also gaining popularity in the medical, workplace, and other training fields. They are also attracting attention in education.

There are two types of headsets: those that must be connected to a computer or game console and those used without such connection. Oculus Quest 2 is a stand-alone device that does not need to be connected to a PC. The current price as of 2021 is $299. In the following, I will introduce how Quest 2 can be used in Japanese language instruction by combining it with an app called WANDER. 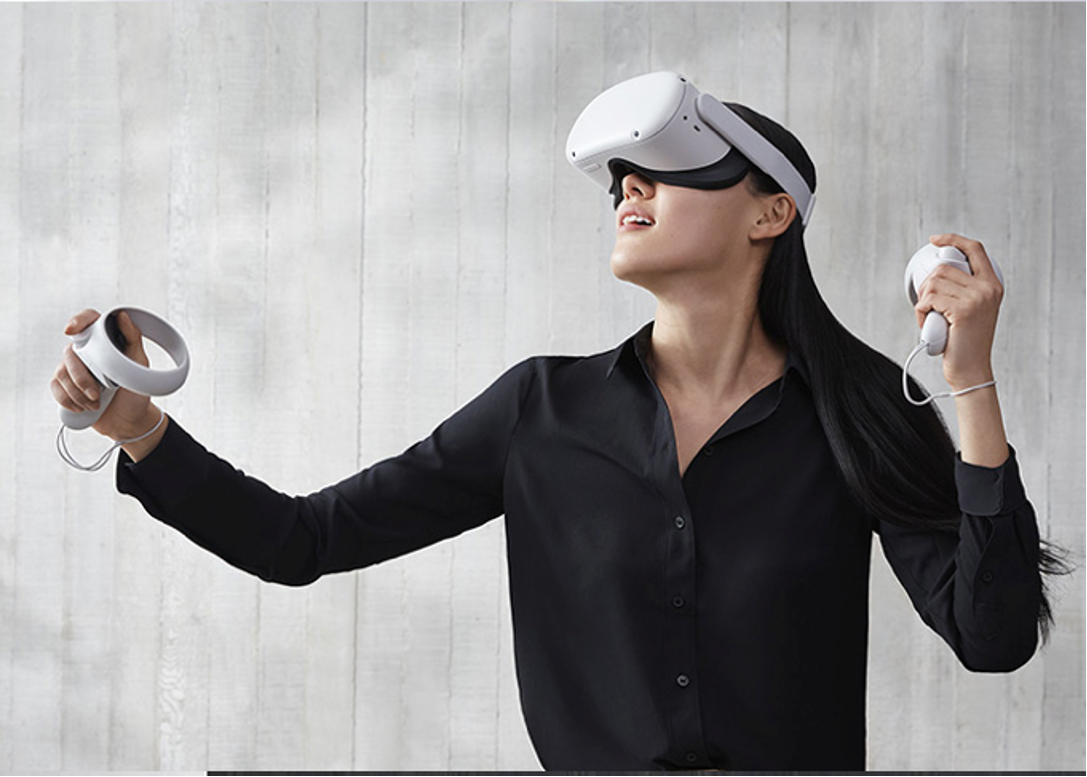 WANDER is an app for virtual travel developed by Parkline Interactive for the Oculus headset. The price of the app is $10. Its main function is to convert Google Street View data into 360-degree images and recreate them in immersive VR space. There is no video, but even with still images, you can feel the realism of actually being there. You can visit not only famous places and historic sites around the world, but anywhere that has Street View data. You can also create your own "Room" and invite other players to join you.

If you are in a room with others, each person can go to completely different places (one person to Africa, another to Asia, etc.). It is also possible to follow an individual to simulate a group travel. Players can always hear each other's voice. In addition, if the Street View contains images from the past, it is possible to go back in time. (e.g., the area affected by the Great East Japan Earthquake)

I think it is better to view VR technology as a technology that will become available in the future rather than as a technology that can be used immediately in Japanese, since headsets are not yet sufficiently widespread. It is better to think about how to use inexpensive general-purpose apps such as WANDER for language instruction. It seems that one good strategy is to involve people from different languages. (March 2021)

The following are some thoughts and suggestions on how the environment provided by Quest2 and WANDER can be used in Japanese (and any world language).

When using the Quest 2 headset, the first step is to set up the VR area.
The video below shows how this is done.

The VR area setting is for the safety of the player.
In the game, you may be swinging your arms up and kicking with your feet.
In order to prevent the player from knocking down real walls or kicking off furniture,
the VR area is set up in advance.
When you approach the boundary, a mesh will appear to alert you.

（This video was recorded with the WANDER app already open. ）

・Voice conversation between players is possible. The sound quality is not bad.

・It is possible to proive context/stimulus to motivate students to listen for and talk about. Teachers must make an effort to set tasks that stimulate learners' interest and elicit language activities efficiently. This is where the teacher's imagination comes into play.

Example 1: Teachers and learners meet at the same place for a tour with set tasks. (An image of free time on a school trip)

An instructor and three students are gathering at Shinsaibashi Bridge. The task is to find giant signs.
The first video image is the teacher's view.
Three avatars represent each student and indicate that they are in the room set up by the teacher.
The head movements of the avatars indicate their gaze.

The "follow" and "unfollow" options let you choose whether to follow another player or move on your own.
The avatars on the screen will not disappear even if the students move freely (or go far away).
The location of the players in the Room can be checked on the map.

・You can use the timeline feature to see past views of the same location. This can be used when designing an activity on the subject of changes over time in a specific area.

Example 2: Changes in Osaka Tsutenkaku Tower show the effects of the Covid-19 pandemic.

Let's use the timeline function to look at the changes in a restaurant called Zuboraya.
You can feel the impact of the decrease in foreign visitors due to the Covid-19 pandemic.

This image was taken from "Michi no Eki "which remains as a legacy of the Great East Japan Earthquake.
These slides show yearly changes.


The activity was designed to make students think about large structures they would see around 2014.
They are pipe lines to transfer earth from a mountain to raise the city center area.
They were removed when the transfer ended around 2016.

A teacher and three students visit Rikuzentakata City.
The video footage is from the perspective of a student.
(He is looking around intently.)

The avatar (blue head) on the screen is the teacher,
explaining the changes in Rikuzentakata to the students,
focusing on a gas station.
(The tsunami reached the read sign of the gas station.)

(Ihe students' voices. did not get recorded well.
They were making various comments.)

NUFS students first describe their campus in English, and then Purdue students introduces Purdue campus.Students used Quest 2 headsets and WANDER. The session was held at 8 pm in Indiana that was 9 am in Japan.

WANDER uses data from Street View to generate immersive images, however, it does not have images of inside of buildings. Those images were taken by a 360-degree camera (GoPro) and uploaded to Stree View.

This project was lead by Ms. Kaho Sakaue and Ms. Yukie Miura as a part of a course project (JPNS 590: VR Applications in Language Instruction). Dr. Mayu Miyamoto (NUFS) along with her students kindly agreed to participate in the project.